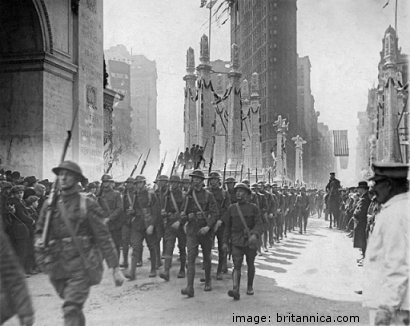 "In late June 1914, Archduke Franz Ferdinand of Austria was assassinated by a Serbian nationalist in Sarajevo, Bosnia. An escalation of threats and mobilization orders followed the incident, leading by mid-August to the outbreak of World War I, which pitted Germany, Austria-Hungary and the Ottoman Empire (the so-called Central Powers) against Great Britain, France, Russia, Italy and Japan (the Allied Powers). The Allies were joined after 1917 by the United States. The four years of the Great War–as it was then known–saw unprecedented levels of carnage and destruction, thanks to grueling trench warfare and the introduction of modern weaponry such as machine guns, tanks and chemical weapons. By the time World War I ended in the defeat of the Central Powers in November 1918, more than 9 million soldiers had been killed and 21 million more wounded."

Did you know that the first-ever tanks, chemical weapons and blood banks were introduced during World War I? Get all the facts behind the conflict known as the "war to end all wars." From History.com:

WWI - By The Numbers